Activities, prizes and more! See the poster below for more details.
Here is a video called “Banned” with librarian Dawn Emsellem speaking about censorship:

Claudia Covert, readers’ services librarian at the Rhode Island School of Design will present a brief history of science, world events, technology and art that led to the birth of camouflage during World War I. Covert was instrumental in identifying and digitalizing RISD’s collection of dazzle ship plans.

In 2007, Covert’s article “Art at War: Dazzle Camouflage” was published in Art Documentation (v.26 #2). Covert was a keynote speaker at the University of Northern Iowa’s Envisioning Design Symposium and a panelist at the Woodrow Wilson Presidential Library and Museum for the “New Light on World War I Topics” Symposium. An interview with Claudia Covert was just published in Art New England Jan/Feb 2014 issue.

Claudia Covert currently chairs the Publication and Research committee of the Art Section of the Association of College and Research Libraries.

The Sephardic Diaspora in the Early Modern period saw transatlantic exchange of religious and cultural practices as well as economic activity. Conversos and Jewish families participated in a global trade network that connected Iberia, Europe, the New World, and Africa. Amidst this dynamic exchange women tactically used the private realm of the home to maintain and preserve rituals and faith practices. This lecture will focus on the material observance of crypto-Jew, Isabel de Carvajal, as described in her Inquisition manuscripts. Themes of religious hybridity will be discussed; Isabel publically acted as a Catholic and attended mass, but in her home secretly practiced Judaism. This mixed identity is one of the key features of converso identity. She and the rest of her family were brought up on judaizing trials in 1595-96 in New Spain, today Mexico, and ultimately burned at the stake in an auto-da-fe.

Dr. Emily Colbert Cairns, a graduate of Hamilton College, received her M.A. and Ph.D in Spanish from the University of California, Irvine. Her research focuses on conversos and crypto-Jews in the Early Modern Period in the Spanish speaking world. She is an Assistant Professor of Spanish in the Salve Regina University Department of Modern and Classical Languages.

Two exciting speakers are coming to the McKillop Library to talk about their latest books: 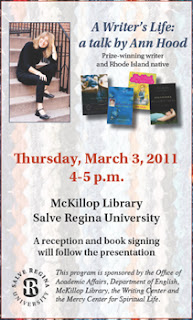 Ann Hood, prize-winning, best-selling author and faculty member in the creative writing program at the New School in NYC, was born in West Warwick and is currently living in Providence, RI. She is the author of 13 books including the bestsellers Somewhere off the Coast of Maine, The Knitting Circle, and The Red Thread. Comfort: A Journey through Grief was a New York Times Notable Book and was selected by Entertainment Weekly as one of the ten best non-fiction books of 2008. She has won two Pushcart Prizes, a Best American Spiritual Writing Award and The Paul Bowles Prize for Short Fiction. Her essays and stories have appeared in The New York Times, The Paris Review, Ploughshares, and many other publications. Her most recent book, The Red Thread, was published in 2010 by W.W. Norton.
This program is sponsored by the Department of English, Academic Affairs, McKillop Library, the Writing Center and the Mercy Center for Spiritual Life.
Read more about Ann Hood on her website: http://www.annhood.us/bio
Read books by Ann Hood in McKillop Library
_________________________________________ 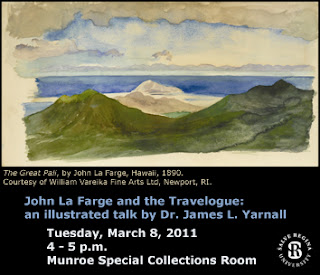 Dr. James L. Yarnall, a leading authority on John La Farge and Associate Professor in Salve’s Department of Art, will give a presentation on La Farge’s illustrated travel writings on Tuesday, March 8, from 4:00-5:00 PM in the Munroe room of McKillop Library. A reception will follow the presentation.

John La Farge, better known for his stained-glass masterpieces, was also a painter, muralist, decorative artist, and writer. During the summer of 1886, at the age of fifty-one, La Farge accepted an invitation from an old friend—the famous historian Henry Adams—to tour Japan for several months. A second trip with Adams was a fifteen-month tour of the South Seas, including Hawaii, Samoa, Tahiti, Fiji, Indonesia, and Ceylon. These trips set in motion ambitious illustrated travelogues that in various forms occupied the artist for the next decade.

An offshoot of this travelogue activity was a large exhibition entitled Records of Travel, a one-man show held in Paris as part of the Salon of 1895. Afterwards La Farge circulated the exhibit to various American cities. As a result of this widespread exposure and publicity, sales of his travel pictures skyrocketed. Until his death, La Farge’s travelogue writings and exotic images of Japan and the South Seas remained an important part of his artistic identity.
For the past three decades James L. Yarnall has been a leading authority on John La Farge. At the University of Chicago, he wrote both an M.A. thesis and a Ph.D. dissertation on different aspects of La Farge’s work. Between 1982 and 2003, he worked closely with the La Farge family on the catalogue raisonné of La Farge’s work in all media. His publications on La Farge include dozens of articles and four monographs. Yarnall has just completed John La Farge, A Biographical and Critical Study, the first biography of the artist in a hundred years, which is scheduled for release in early 2012 by Ashgate Press.

(Schedule changes when classes are not in session)